The first fruit cluster of coconut tree usually established five year after transplanting.
On the 'genjah' (early harvesting) varieties, the first fruit could be picked on the fourth year after planting.
The ripening period of the fruit is about 9 - 12 months after the pollination, depend on the variety.
The color of the skin is so various, from the green, yellow, ivory and brownish.
And the shape is also so various from globular, round, sprawl, or  triangular.
The size is so various too, depend on the variety. 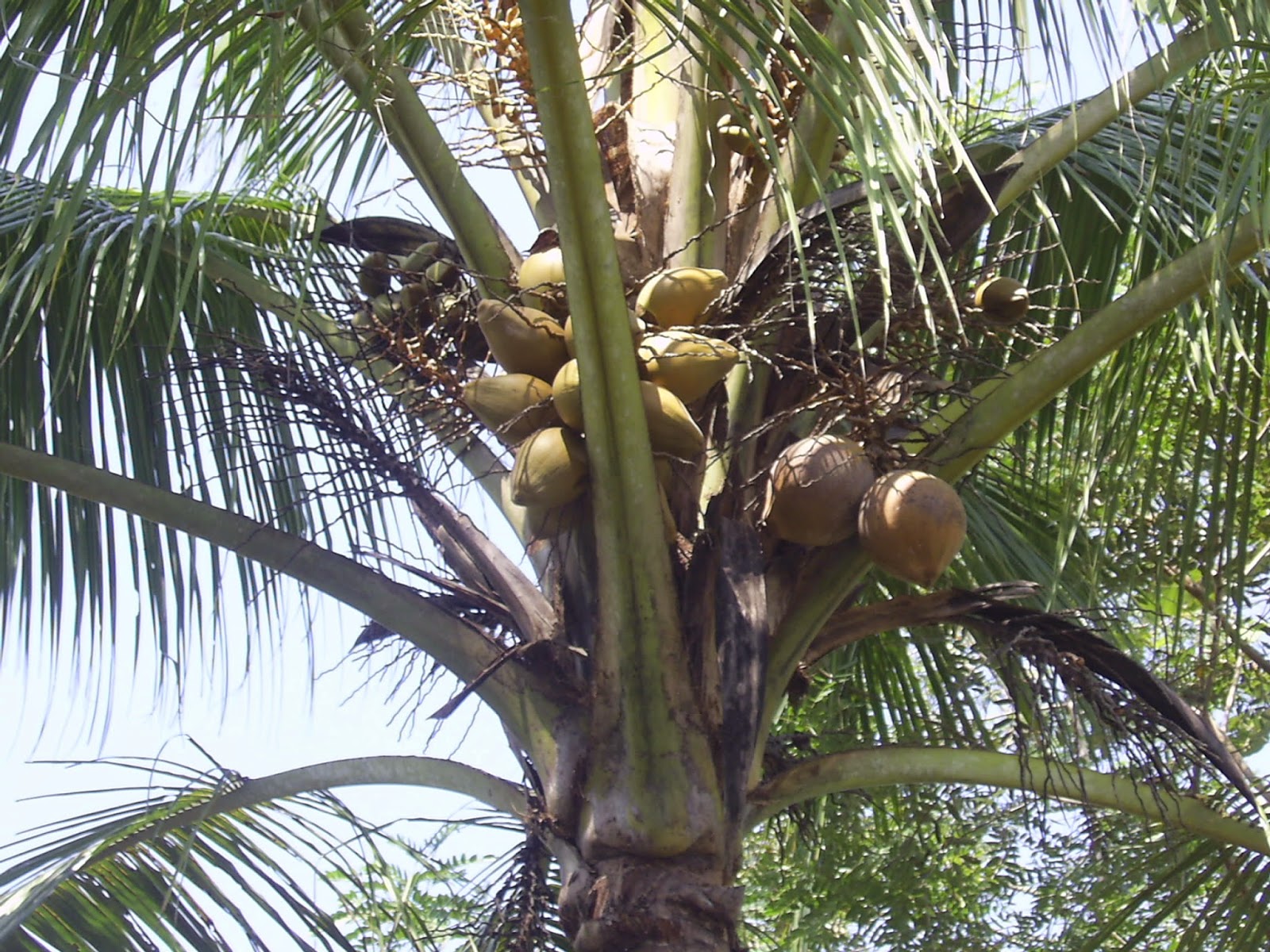 In the Javanese tradition, all stage of the fruits have their own name :
Bluluk : The youngest stage after pollination
Cengkir : The intermediate stage before the fruit flesh is formed
Degan : The young coconut fruit when the tender fruit flesh have already formed
Kelapa : The mature fruit when the flesh have thicken and harder
Kiring : The over ripening fruit that the skin have wrinkled and the water inside have depleted
Cikal : The fruit that have sprouted 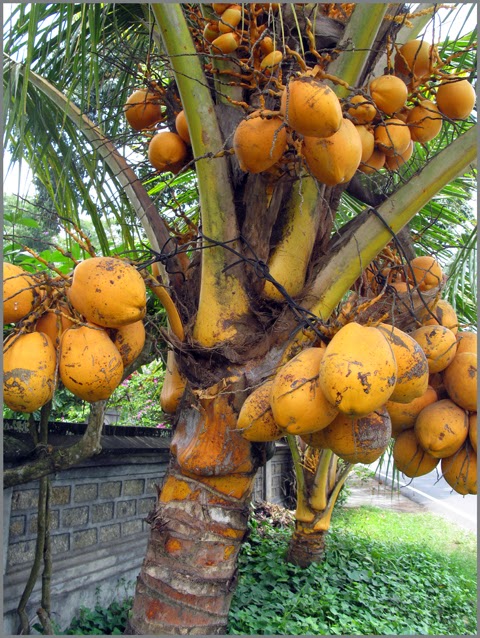 Here they are the 'bluluk' that I found under the coconut tree near my house.
During this windy and humid weather, or heavy rain period, we can find a lot of fallen 'bluluk'.
When I was child we often made so many traditional toys using bluluk. 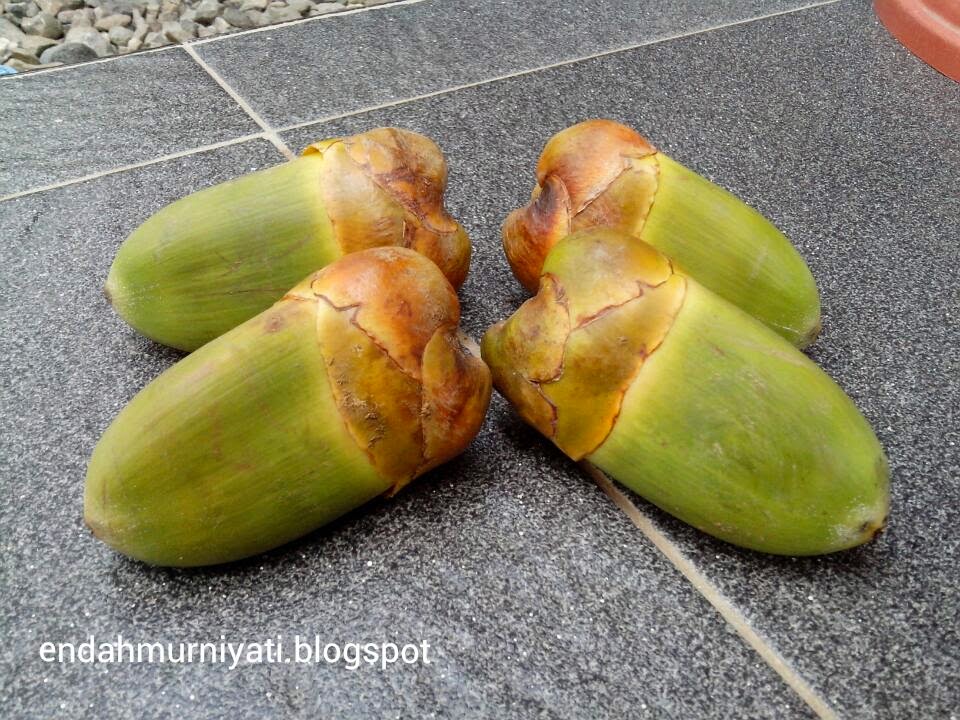 The young bluluk is usually used in traditional salad called 'rujak bebeg', that mixed with other fruits.
Grated bluluk is also cooked with grated coconut, spices, meat or fish, seeds, and other stuff, then wrapped using banana leaves and then steamed. 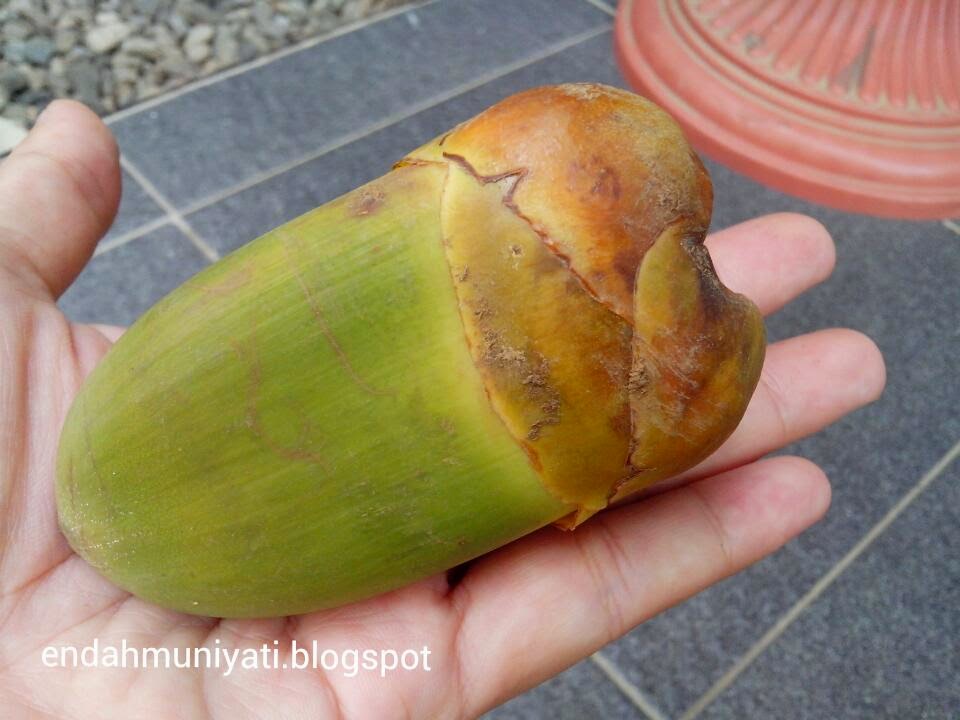 But please..., the bluluk that I have found is too 'old' and have decayed on their base.
The hole inside will be bigger and filled by the water. 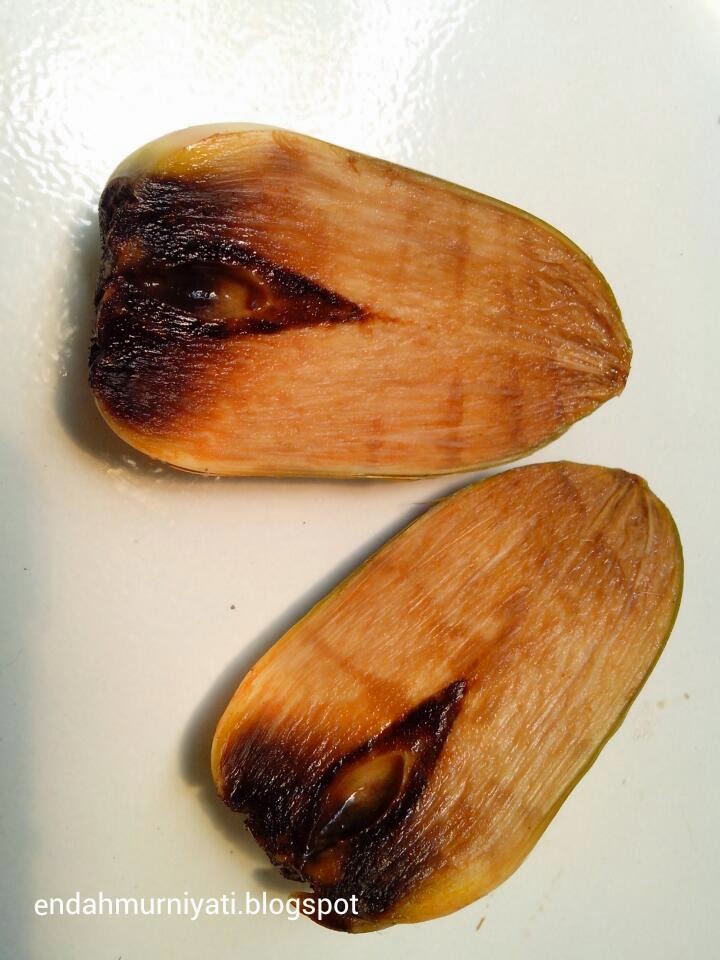 Cengkir is the medium size of fruit, much bigger than bluluk, but smaller than the mature coconut.
In this stage, the coconut water have filled inside, but the flesh haven't formed yet.
Cengkir is often used in traditional ceremony 'mithoni'.
Mithoni is a Javanese tradition that held for seven months pregnant mother.

Degan is bigger than cengkir, and the size is the same with the mature fruit.
In this stage the sugar content of coconut water is on the highest level.
The tender flesh have formed, so on this stage coconut is usually present as special and delicious drink. 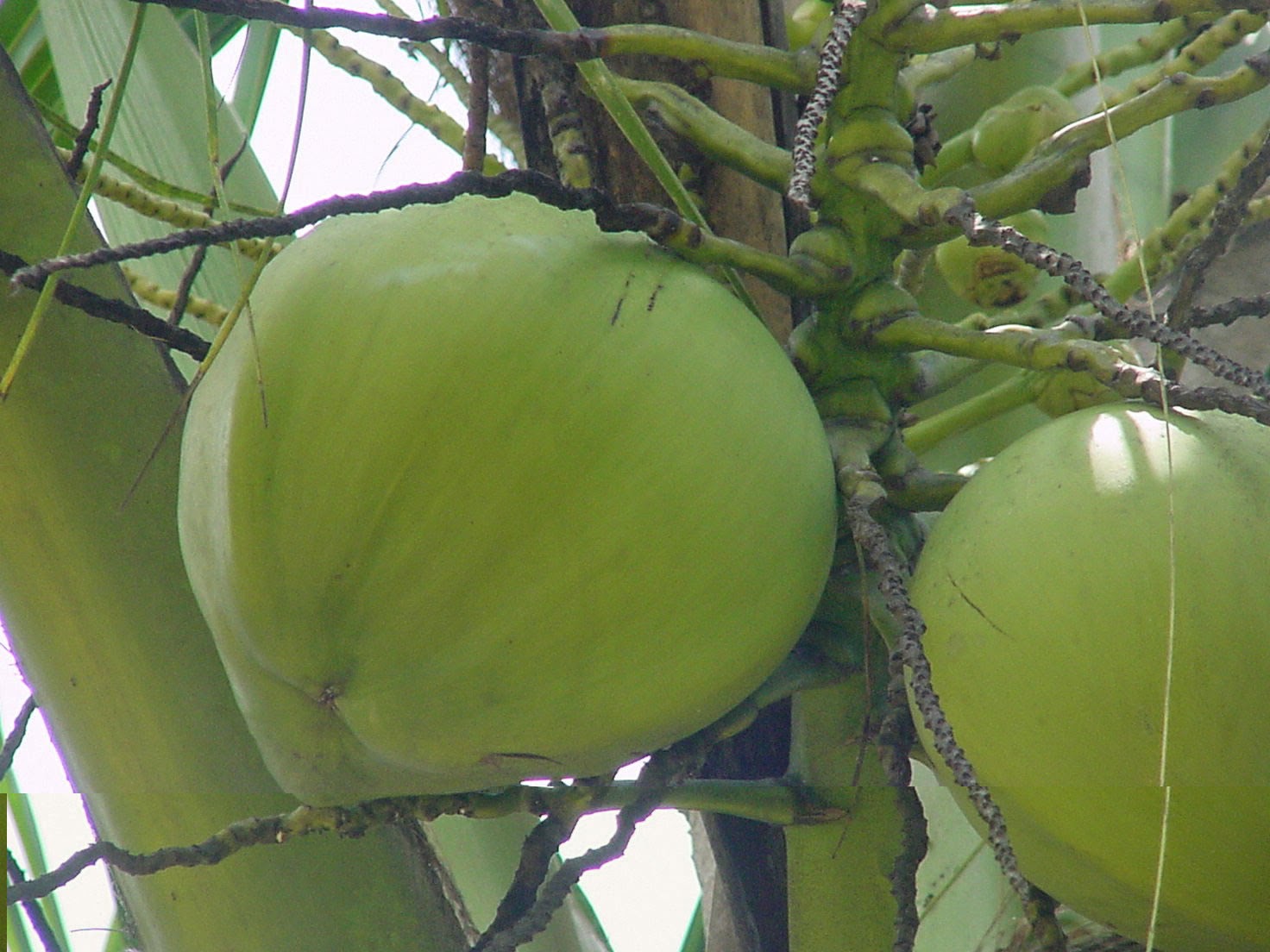 Kelapa or klapa is the mature or ripen fruit, that the flesh have thicken and harder.
The fruits are usually harvested on this stage.
The size and color is the same with the degan, we can distinguish both of them by knocking outer side of the fruit.
If the sound is 'heavy', it's still on degan stage, but if the sound is 'light', the fruit have mature enough.
The 'light' sound is caused by the coconut water have reduced.
The sugar content of the coconut water on this stage is lower than degan. 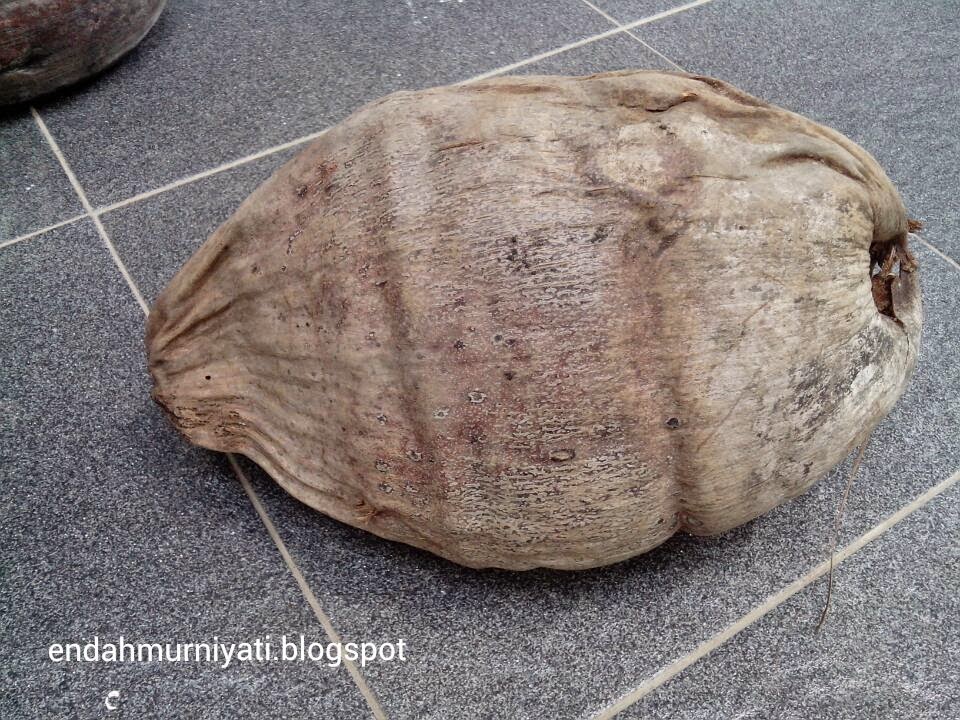 Kiring, this is over ripening coconut fruit, and sometimes used as a seed on the nursery.
But the quality is usually not good enough.
We can see that the skin have turned brown and wrinkled.
The 'kenthos' (the little shoot) begin to be formed in the fruit inside. 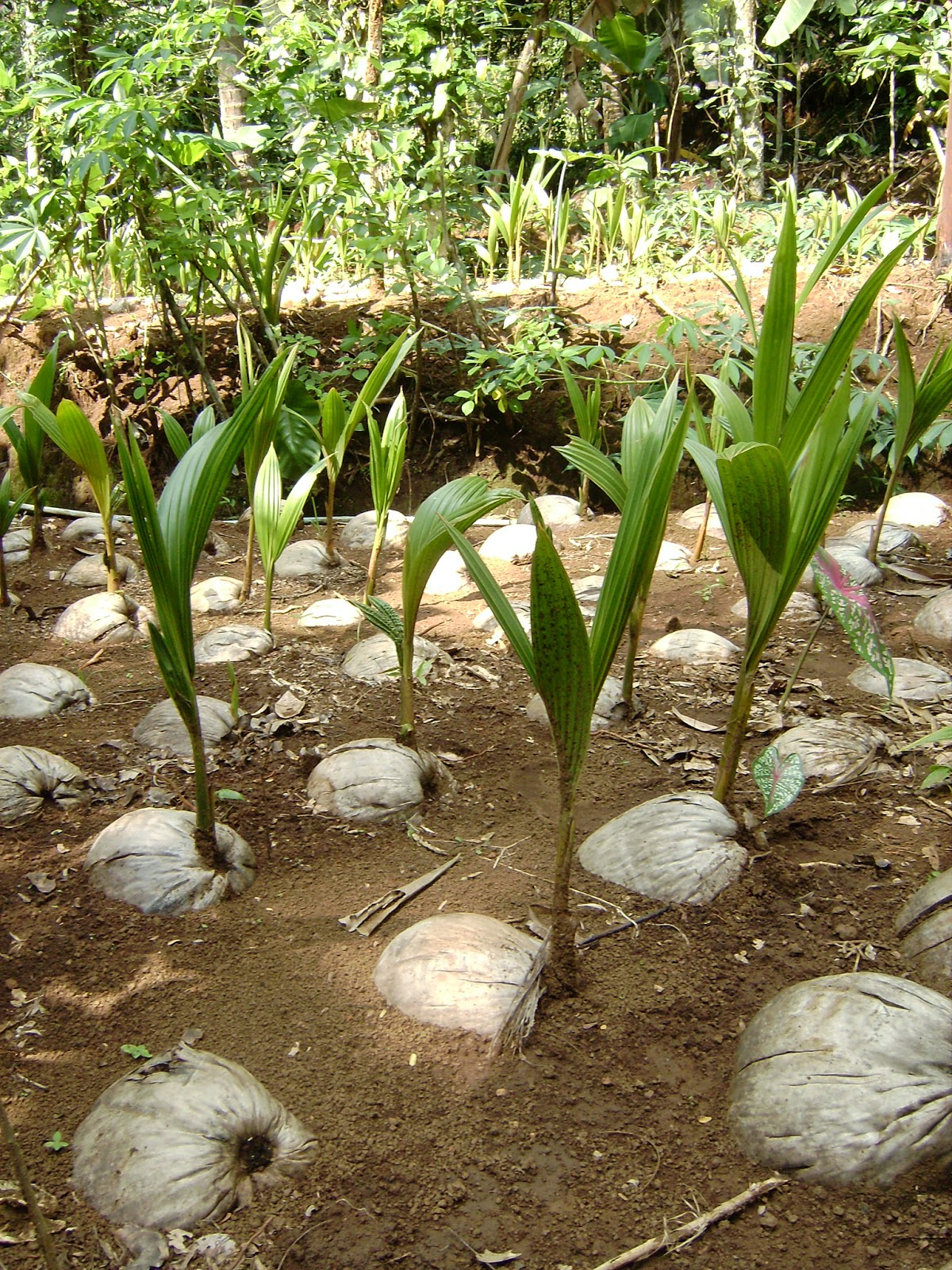 And the last stage is cikal.
Sometime we can find cikal grows their own under the coconut tree.
The old fruit that fallen and were in the favorable micro-climate will be sprouted.
These cikals are ready to be planted on the ground.

Next we still talk more about the other part of coconut tree.
Thank you for following and have a nice weekend.
Posted by Endah Murniyati at 1:48 AM

Email ThisBlogThis!Share to TwitterShare to FacebookShare to Pinterest
Labels: Coconut